Showing posts with the label kinect for pc
Show all 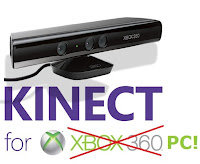 On Tuesday, November 22 Microsoft announced that it is working on getting its Kinect motion-sensing device ready to use on PCs that run Windows. The company currently sells Kinect for its Xbox 360 gaming console; however, it is hard at work and says that it will have the PC version ready by early 2012. "Coupled with the numerous upgrades and improvements our team is making to the Software Development Kit (SDK) and runtime, the new hardware delivers features and functionality that Windows developers and Microsoft customers have been asking for," wrote Craig Eisler, general manager of Kinect for Windows, in a blog post. "Simple changes include shortening the USB cable to ensure reliability across a broad range of computers and the inclusion of a small dongle to improve coexistence with other USB peripherals," Eisler continued. "Of particular interest to developers will be the new firmware which enables the depth camera to see objects as close as 50 centimeters i
Post a Comment
Read more
More posts