Showing posts with the label Samsung Galaxy Tab 7.0 Plus
Show all 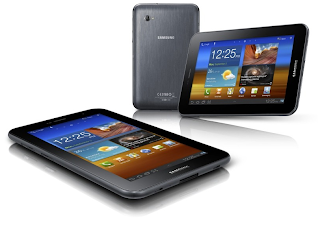 Samsung has just confirmed that another variation of its Samsung Galaxy Tab will be hitting stores soon. This new device, known as the Samsung Galaxy Tab 7.0 Plus, will begin selling on November 13, 2011 at many U.S. retailers for a surprisingly reasonable $399.99 according to a statement released by Samsung. The 16GB tablet, complete with 7" screen, is focused more on home entertainment than business usage, coming complete with a Peel Smart Remote TV app that allows you to tap on the screen in order to quickly find and watch television shows on any manufacturer's TV or home entertainment system. In addition to that, built-in infrared in the tablet allows you to control a home theater or television setup. The best part is that you don't need any extra cables or hardware, just what you already have in your living room and the tablet, in order to control the TV functions. The Peel remote app allows you to have full control over your TV or entertainment system regardless if i
Post a Comment
Read more
More posts