Showing posts with the label IBM Selectric typewriter
Show all 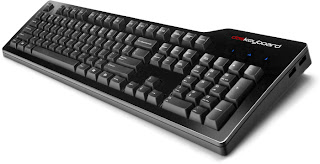 At this year's South by Southwest conference Metadot Corporation unveiled their very retro keyboard known as the DasKeyboard (German for "The Keyboard"?). Basically, what this device aims to do is bring back the touch and feel of typing on one of those old IBM Selectric typewriters. In fact, Metadot Corporation wanted to let users know just how retro the DasKeyboard feels by having a few of those old IBM Selectric typewriters at their South by Southwest booth. The keys on the DasKeyboard are larger than most traditional keys with slightly concave tops. In addition to that, they make a rather enjoyable click when you press on them. The DasKeyboard also gives you some tactile feedback as well that provides you with a little assurance while typing. Metadot Corporation also makes a similar keyboard to the DasKeyboard without the clicky noise, perfect for office settings, school settings or people who talk on the phone a lot while typing. There is even another version that doe
Post a Comment
Read more
More posts